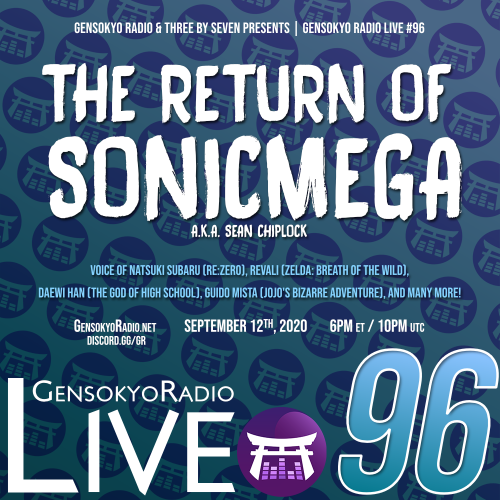 Hey there! We have an exciting show just around the corner where we're inviting professional voice actor (and former GR staff member) Sean Chiplock!

Over the last decade, Sean's had the opportunity to be part of a bunch of video games and has dubbed for an increasing list of anime series including the roles of Subaru in Re:Zero, Guido Mista in Jojo's Bizarre Adventure, Revali/Teba in Zelda: Breath of the Wild for Nintendo Switch, and many more. Rather than list them here, you can check out the list for yourself over on Behind the Voice Actors.

What is his history with Gensokyo Radio?

Sean also helped Gensokyo Radio out during the early days. He became acquainted with Gensokyo Radio in 2011 as an avid listener and a fan of the Touhou Project game series. Sean helped contribute in terms of content and a bit of monetary support throughout the station's first few years. He helped fill in as co-host during several Gensokyo Radio Live shows and was a key member of the Stage 5 series that aired in 2013 and 2014. Sean quietly left Gensokyo Radio in 2017 to focus more on his voice acting career, but has remained a friend of our staff since then.

Sean's most recent appearance on a Gensokyo Radio broadcast was 46 episodes ago in 2016, during Live #50 where he joined us for a couple hours during the 5-hour special.

In preparation for this special broadcast...

...we'd like to reach out to our community for any questions or comments you might have for Sean! You may either reply to this thread (you'll need an account), or send me (LunarSpotlight) a message through the forum in case you’d rather not have your question be publicly visible.

We look forward to having Sean around once again, and we hope you'll join us on Saturday, September 12th (6pm ET / 10pm UTC) to take part in what is sure to be an entertaining two hours via Discord and on GensokyoRadio.net or our Android app. See you there!