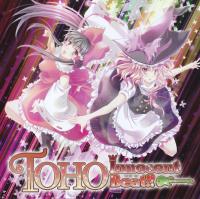 This week, it was announced that Gensokyo Radio will be making an official guest appearance at TouhouFest in 2023! Taking place in Torrance, California, TouhouFest is a brand new event which invites fans and friends to get together and celebrate the culture, characters, and content through the fans who have helped make the series what it is today. We’re excited to be a part of the festivities, and we look forward to seeing many of you there!

Aside from our big announcement, we had another double-event weekend with Live #119 and Meetup #15. Live featured more new music, games, and news as usual, and the topic for Meetup this time was titled “The Booth Idea” where we talked at length about an idea we’ve had floating around since 2015.

Additionally, we spent some time doing some housekeeping by working through our backlog. As a result, there are several new albums available from a bunch of circles, many of whom we mentioned back in June.

That’s all for this week, stay tuned for more news over the next couple weeks as we ramp back up to full-time mode for a bit, and thanks for listening!