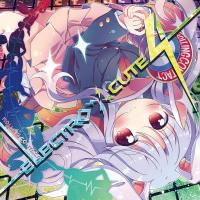 This week, we pushed more music into the station’s rotation. You can now hear more music from the following new and existing circles:

We also had some fun launching a couple of meme products for April 1st: “Unusually Textured” and “A Little Funky” shirts which were off-print versions of our Cardinal Reimu and Chill Cirno T-shirts, respectively. These were shirts that had some sort of print defect which caused the prints to have more of a “popcorn ceiling” type texture, and were deeply discounted at the meme price of $9. At the time of writing, the “funky” Cirno shirts are sold out, and we’ll still have the Reimu shirts available through the end of Monday.

We have an additional short-term project ongoing which will make its debut later this month. Originally dubbed the “April 1st” project (now just the “April Project”), we felt this wasn’t quite ready for release when the time came, but you can still expect something new coming from us in the not too distant future.

Finally, in case you missed it, Lunar (that’s me!) has a weekly streaming schedule in addition to our regular events here on Gensokyo Radio! This is part of a variety series that gives our listeners an opportunity to do something different and hang out with members of our staff team off-hours. It would make my day if you could stop by, tune in, chat with me and others, use me as background noise, etc. Currently, streams happen on Monday, Wednesday, and Friday evenings. I look forward to seeing more of you over at twitch.tv/lunarspotlight!

As always, thanks for listening (and watching)!