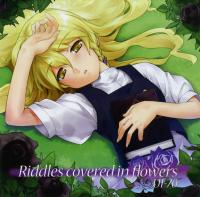 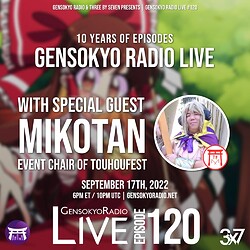 This week, we broadcast our 120th episode of Gensokyo Radio Live! This episode marks 10 years worth of episodes, with episode #1 having broadcast on August 31st, 2012. Since that time, we skipped a couple months early on before holding fast to a monthly schedule, and we’ve broadcast every month without fail since May 2013. It’s the most consistent content we produce as well as our longest running series. Right now, you can find episodes back to #40 on our website, and even further back to #28 on Mixcloud.

We also invited our first special guest in a while: Mikotan, the Event Chair of TouhouFest! It was a great opportunity for us to sit down and chat about the event, learn more about what fans can expect from it, and look behind the scenes a bit at the people who are working to make this event the best it can be. For those who aren’t already aware, Gensokyo Radio was previously announced as a guest at next year’s event. You’ll be able to find us out there at our own booth, visit our panel, and enjoy the company of other fans (and listeners). TouhouFest will be held in Torrance, California (near Los Angeles) from April 29th to the 30th, 2023.

Finally, I’d like to reach out for some help from our community. Since January 2016, Gensokyo Radio has had a partnered Discord server giving us and our server members some additional perks. Partnership has changed over the years, and at present there are a set of key metrics which we must continuously satisfy to remain partnered.

With that said, we are currently in danger of losing partnership due to the “communicators” metric. This metric requires a minimum number of people communicating in our server each week, and we are just barely below the threshold to meet this requirement. It is a hard number, not a percentage, so I would like to ask you and everyone else in our server a simple favor: say something in any channel today, next week, and the week after. Partnership metrics are rolling 8-week averages, which means we need as many people chatting as we can muster in order to tip the average.

If you haven’t written an introduction yet, write one; if you have a question about our server, station, website, app, or anything else we work on at GR/TBS, ask it and we’re here to answer; if you just want to chat with other fans, you’re already in the right place. This isn’t something our server should be having trouble with in the first place, so let’s turn this around and enjoy the community on Discord we’ve worked hard to form over the last 6+ years!

For folks reading outside our Discord server, you can help by joining us at Gensokyo Radio.

That’s all for this week. Get out there and chat with another fan, and thanks for listening!