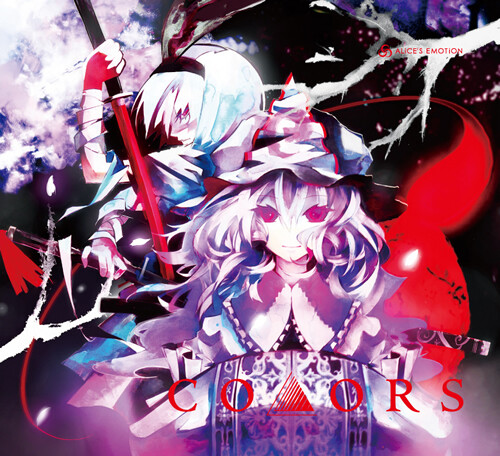 When I pick up an album by an artist within the Touhou Music sphere, I have a ton of expectations for what the album will be sonically. For example, typically, when I pick up a Hatsunetsumiko’s album, I expect that the album will be an onslaught of pop and R&B bangers back to back. Another good example would be a Jerico’s Law album with some insanely fast drum & bass where all you can do is buckle up and take the ride. However, when I pick up an Alice’s Emotion album, I usually expect some outstanding electro dance music that I can put on in the background and groove to while doing other things. The last thing I would expect is one of the best guitar albums I would hear in this genre of music.

“Colors” by Alice’s Emotion is an album I did not expect to take me directly to the Netherworld and walk me around the place. It sounds relatively modern despite being released at Comiket 76 in the Summer of 2009. This album is everything you expect from Alice’s Emotion in some aspects. However, in others, it subverts expectations in the instrumental department with guitar and even bringing on HIR a year before them linking up with Includeore for a track. As I said, this album is pure shred when the arrangements bring those strings into focus. But before I get to the killer guitar, let me set this album up for everyone so you can get a broader look at what this album is made of.

This album consists primarily of tracks from Perfect Cherry Blossom as well as tracks from Mystic Square, Embodiment of Scarlet Devil, Mountain of Faith, and Subterranean Animism. It is a mixture of vocal and instrumental tracks that I would place in the general electronic music category since it tends not to stick to a specific subgenre and mixes it up from time to time. There are arrangements by REDALiCE, Betwixt & Between, kz, DJ Noriken, Amane, and Tsukasa, with vocal performances by Ayumi Nomiya, Aki Misawa, and Michiru Kaori. Overall, this album is jam-packed with a lot of high-quality music. With that mixing and matching of sounds, you have an album that reflects the overall vibe of the Netherworld itself. It is neither good nor bad; you float in limbo until you are worthy of passing on. Listening to the first three tracks draws you into the feeling that you are in that world.

It starts strong with the intro track “Truth *intro” by REDALiCE. It has this synth arranged opening of the Stage 6 theme “Ultimate Truth” but is underlined by this soaring guitar that becomes this disjointed rhythm section that props up the main melody. This track also sets the listener’s expectations for the album as a whole. It leads perfectly into the next track by REDALiCE, “Deadline,” with its driving, percussive drums and a strong bassline. It feels large with its open, airy keyboard and drops that you can clearly tell were made for that stock “somebody scream” sample everyone started using in the 2010s. If you close your eyes listening to these two tracks, you might envision yourself walking into the Netherworld and witnessing a dance party about to begin around Hakugyokurou. Combined, these tracks give off the vibe of wonder, elegance, and overall calm.

Then we move on to the title track, “Colors,” and for people out there who play a lot of arcade rhythm games, in my case Groove Coaster, you should be relatively familiar with this track. It features Ayumi Nomiya on vocals and HIR on guitar, killing it in their respects. This track is about spirits entering the Netherworld to usher in a new spring. I always find it interesting reading into lyrics of tracks like this because meaning is subjective; the artist could mean one thing, but the listener can always find another meaning that matters to them. I could go on about the lyrics more, but I need to talk about this guitar. It is amazing. It stays out of the way when it needs to, but when it comes to the front of the mix, it sure is center. The solo alone made me double-take, which is funny because I don’t think I caught the solo while playing this track on Groove Coaster, maybe because I am way too focused on not failing this song. This track feels like the crescendo of that dance party you walked into in the first two tracks, drawing you further into the world this album invokes

This album delivers at every corner, with driving bass, fantastic vocal deliveries, and excellent use of guitar to break up the classic drum & bass vibes. There are times when the mix gets a bit muddy, but I think that is done on purpose. The track “Sakura Distortion” has this heavy intro that almost sounds like industrial noise, followed by what I can only describe as an invocation of the Devil. However, I can’t tell what the voice is saying clearly, but I think that is by design which, if it is, I am totally cool with.

I love the tracks that use the guitar well on this album overall. I especially love the track “Tears Doll,” which features Michiru Kaori on vocals—using the guitar in a way that gives this track something to hold onto together with Michiru’s vocal delivery. This is a track about Alice fighting back loneliness and begging for someone to keep her company.

Overall, I highly recommend “Colors” as a must-listen for every Touhou Music junkie out there. Its clever use of guitar, interesting use of distortion, and beautiful vocals put this album in the top 20 of my “go-to” Touhou Albums to usher anyone into the music side of the fandom, right up there with the best EastNewSound and IOSYS releases.