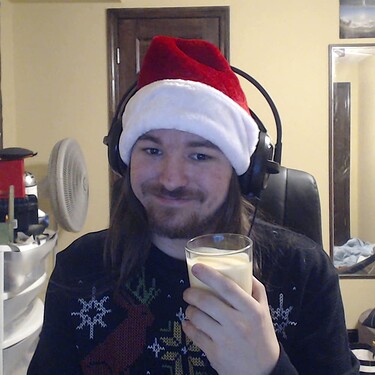 It is that time of the year here in our neck of the woods. The temperatures are falling and some places are seeing the first snow of the season. People are either snuggled up next to their loved ones staying warm by drinking their favorite hot beverage or outside enjoying the cold playing in the snow. Here at the Louisville studio, all we got is mud and fridged cold. It makes me mad. I am from Cleveland, Ohio! I WANT SNOW!! THIS IS AN OUTRAGE!!

Anyway, this next month is all going to be all about this. From December 3rd to the 31st I am going to be reviewing some of the Touhou winter mixes and Christmas songs I come across and including them in a playlist below for you all to enjoy throughout the season. Each week I will be adding five songs to the list and doing a review for each one. So let’s get into this week’s tracks, shall we?

Ok, this song is stretching it here. It is not really wintery, or themed as such but let me put it in context. I was trapped inside my apartment with my roommate, who got called off work due to 2 inches of snow, with no TV and only the internet. I left my Touhou Christmas playlist on autoplay. I wasn’t paying any attention to when the playlist was going to end so it just went on to the next song. It happened to be this song.

With snow on the ground and in the air, with a nice hot cup of (INSERT DRINK HERE), and warm feels this track can easily be wintery. It feels good. It is bouncy. It makes me happy. Plus who doesn’t like a good Alice theme? I love this track.

The snow is falling gently as you walk about outside. You are all bundled up and you start getting pelted with snowballs from friends. That is what this song makes me think about. It makes me think back on winter memories. Those times when snow actually fell. The crescendo is powerful. The song has a lot of emotion. It places me in the season. It puts me there regardless of where I am. That is that I think drives this song. I want it to put me in the mood. I want it to be convincing about it and think that is the strong point of this song.

“Let it Snow, Let it Flow” by rythmique

If you took Touhou, added a Christmas theme, and then dipped it in ALL THE SUGAR, this is the song you get. 3L vocals are really nice on this track. It has a bouncy feel. Perfect for when you want to go outside and play in the snow. Near the end of the track, there is a nice harmonic that kinda builds into “O Come, all Ye Faithful,” which I found very nice since the rest of the song just sounded like any other piece of Touhou Doujin Music. However, I don’t like the intro too much but maybe it is just me. It feels out of place with the rest of the song. You could argue that it has to do with the theme and overall fun nature of the song. Your tastes may vary with this song but feel like this song is one we cannot ignore for this playlist given the sparse nature of Touhou Christmas tunes.

Yeah, this is technically two songs, however, let me but let me explain why I feel like this needs only one review,(other than the obvious fact I am too lazy to look up the both songs and do a review on both of them.) The first track starts that mystical and fantasy feel I CRAVE in most orchestral works. I can see Reimu standing outside the shrine as the first snow of the season begins. She is watching the fairies play in the snow as Marisa is building a snowman with Alice. “I shouldn’t go on a genocidal rampage against these creatures,” She thinks to herself, “At least not today.”

Then as it transfers over to the next track, I can see Reimu going on to instigate a snowball fight between all of them. That is one thing I like about instrumental tracks, it allows me to build a story in my head. It is like the narrative in my head is being directed by the music itself. I feel the second track does that in spades. The periodic guitar is nice too. You don’t hear that a lot in most Touhou Orchestral arranges so kudos to Carrot Wine for doing that.

“Heart of Glass” by Liz Triangle

Let’s get right to the point: the vocals on this track are spectacular. The acoustic guitar adds a nice bit of depth to this song. It pushes that emotion that vocalist lily-an is playing off of. That piano is also great because I feel like it is playing nicely with the violin and that guitar. I mean, yeah they are all strings so that should go together but it is not about the instrument it is about the people behind them and I feel like everyone on this track did their part to really bring this song home. From the first piano cords, I was already getting my blanket and hot cup of coffee. I wanted to snuggle up with the song on a cold, snowy day. It makes me feel the season.

Well, that is it for this week. Tune in next week to get five more Touhou tracks for this winter season. So from all of us at Gensokyo Radio to you, Happy Holidays and stay warm.