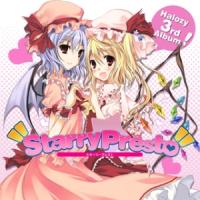 "ENGAGED DANCEHALL" by Alstroemeria Records (REVIEWS ARE BACK!) 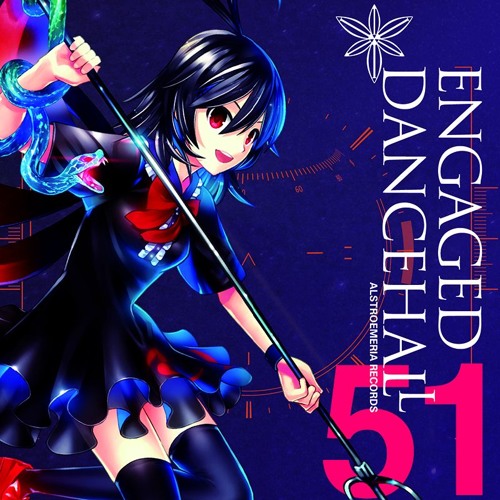 Sorry, had to get that out of the way because it has been OVER A YEAR since my last review. I am glad to be back doing something that can occupy my time in a positive way. Got to keep myself from the drugs and violent video games, am I right?

So what was the long wait? Well, to make a long story short, the shift to GR6 broke all the album art on every review. This was because when I joined Gensokyo Radio, I continued an old process I used before on Facebook using an external site to resize and save the image to embed into the article. So we needed to build a portal so I can upload the images and resize them to fit because artists are weird. Why send me a digital album covers that is 1000 x 1000 pixels! That is what happened as of last week. I spent a whole night after work compiling the broken art and pushed it all site side.

So here we are, fresh out of the detailing shop with a fresh coat of paint, a pine scented air freshener hanging from the mirror, and brand new tires. The only problem is that they still could not get that ketchup stain off the visor, but I guess that is just because I am still here and more than likely after 2 weeks I am going to run the poor thing into a ditch with a large coffee in my lap. In the meantime, I am going to keep doing reviews so let’s get on with it.

Well about a month ago there was a little shindig over at the Tokyo Big Sight called Comiket 90. Now, even though reviews were on the back burner, I was still keeping tabs on the Touhou music scene. When C90 came around, I started to listen to all the cross-fades I could find. There were some that caught my eye, and I will get to them soon, but one circle always has some sort of huge presence in the EDM scene we just can’t ignore. That circle happens to be Alstroemeria Records and they did not just add another album to their discography, but they brought something that long time fans can listen to and remember back to past records.

Their release of “ENGAGED DANCEHALL” had me looking again at another one of their works. I haven’t reviewed any of their albums outside of “DECADE OF EXPOSE” but I do enjoy some of their other works. I feel like some people look at them as the little sister to groups like IOSYS and East New Sound. That does not do them any justice. These are the same people that gave us “Bad Apple!!!” When that song comes on, who doesn’t want to don a red robe and throw red and white painted stress balls at the local wildlife claiming they are “Youkai pests in need of extermination!” (My neighbors love me.) See, maybe not the stress ball part, but you still get in the Touhou mood. Alstroemeria Records is the cornerstone of the Touhou culture, and they proved that with this album.

The album starts with a very nice complextro arrange of “Primordial Beat ~ Pristine Beat” from DDC. You are greeted with these nice wubs, and I love wubs. In good Alstroemeria fashion, the song builds into this nice soft drop that gets built upon. Right around the middle of the track, there is this breakdown that sounds like something off cYsmix’s “Haunted House” which I found to be wonderful and fresh. I think I one point I started to look up to see if cYsmix was even credited on that track because it sounded so much like him. After that, you notice the song is over but the beat carried over in the next track, which seems to be how this whole album flows. It keeps the same beat across all 10 tracks which at first was something I was not too fond of, but as I kept listening to the album on loop, it kinda grew on me.

Another thing I applaud this album for is the cool instrumentation throughout the album. A good example is the horns in the track “Unchain Pendulum.” They’re akin to the name “Electric Trumpet” because it sounds like you hooked a Trumpet to a Tesla coil. It just sounds great contrasting with the vocals of nomico. It makes the song really interesting to the ears.

Other than that, this album features the same suspects from their previous albums on vocals Mei Ayakura, nomico, Tracy, nachi, mican* ayame and Camellia, with Masayoishi Minoshima on the arrangement. I always love how this man works. I love how he has his hand on the pulse of the EDM scene. I remember one year he flew to the states to see Skrillex(?), What So Not, and Flume live and had a blast.

Alstroemeria Records always puts some sort of remix or re-release of “Bad Apple!!!” somewhere on the album. This time, it is a remix by Nardis who decided the song needed to sound more like a bass driven, dubstep-y, anime opening which I love. Somewhere near the middle of the track you hear this distorted bass guitar kick in with nothing else but the supporting snares in the background and then you hear the first verse of “Bad Apple!!!” and you just get these goosebumps. It is just a banger of a track.

I feel like this album is geared more towards those who have been long-time fans of the group and wanted to give them something that expressed their love for the community that keeps them going. It is the same Alstroemeria we had back in the beginning and they haven’t changed. I am not saying that is a bad thing, I think it’s wonderful.