"Seated with Liquor" by Draw the Emotional and Foreground Eclipse 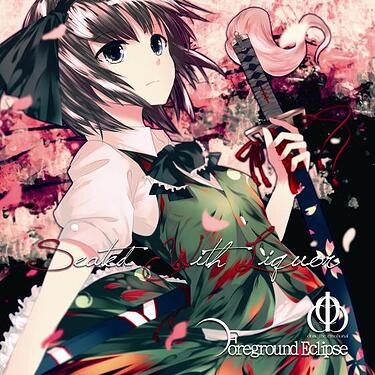 I have stated in a previous review that I have been into metal for a long time before Touhou. So when I heard of the Touhou metal scene, I hopped right on in. There were two bands that really caught my attention, Foreground Eclipse and Draw the Emotional. Both bands really impressed me and had something I really admired, the vocalist. Where Foreground Eclipse had some amazing clean vocalists at their disposal, Draw the Emotional had the best screams in the scene. I used to joke “Imagine if they were to do an album together!” Then Comiket 83 happened and I lost it.

“Seated with Liquor” is an collaborative effort between Foreground Eclipse and Draw the Emotional at one the best metal albums in the Touhou Universe. The album is my number one favorite metal album of all time, which used to be “Exhibit B: the Human Condition” by Exodus. The album marks both bands at the peak of their musical careers. Draw the Emotional contributed to instrumentals and backing vocals while Merami, who sings clean vocals with Foreground Eclipse, was the lead on most of the songs along with her band backing her on 5 tracks including 3 original songs. I could safely say the Merami has the best female voice in all of metal (Sorry Alysia White-Gultz). It was a match made in heaven and a project that I think, could not be touched again within Touhou. The album has some of the best lyrics and arrangements I have ever heard in the metal.

Let me first start with the song “Accept your Fate Now” which highlights Draw the Emotional’s vocalist/arranger, ゆよゆっぺ, ability to scream. This song is so heavy, when I first heard it I freaked out all over my Facebook page and sent it off to my main wall. I listened to this song for at least 7 hours straight. The vocals are so crushing, that the clean vocals are just add icing to the cake. The instrumentals are also brutal and made me think of something by Mastodon (for some reason).

The song after that is one of my favorite songs of all time, “Stay by My Side,” when it comes to Touhou metal. It made me groove, head bang, and sing along. What is nice is that this is some of the best vocal work Kakichoco has done to date. The drum work is really good, and the guitar work is stunning. This song is heavy but meaningful. I kept this song as my wake up alarm on my laptop since it came out.

This album takes the cake for being the best album to date. Both groups did a great job with this album and really made this one stand out from the rest of the pack at C83 for sure. What is cool is that I just started with Touhou Music Reviews when C83 started up and it was a treat to hear this album release. If you have a chance, pick it up. Something like this can never happen again, especially since Foreground Eclipse split up after Comiket 85. Now if only Draw the Emotional could do an album with Kissing the Mirror!